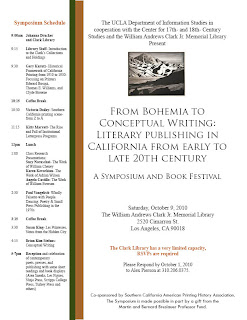 Pie In The Sky Press will be showing work at the reception, with a short reading by Paul Vangelisti.
Posted by Rebecca Chamlee at 12:18 PM No comments:

Visit Pie In The Sky Press at the L.A. Printers Fair 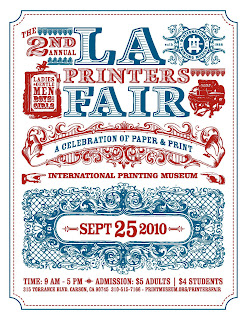 Posted by Rebecca Chamlee at 10:04 PM No comments:

Study for the Possibility of Hope 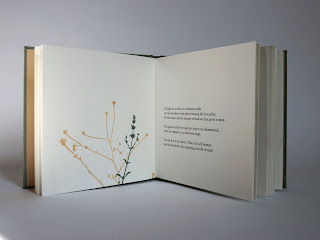 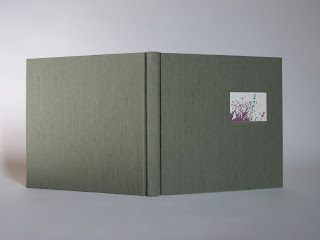 The printing is nearly complete on my latest edition, Study for the Possibility of Hope, by poet Dennis Phillips.
Paul Vangelisti writes, “ Dennis Phillips, in Study for the Possibility of Hope, embarks on a speculative and finally optimistic version of the pastoral, examining the poem’s (and our) place in the natural world. As he was also at the time working on his novel Hope (Green Integer, 2007), one can’t help noting the aptness of some of the poet’s musings in relation to that other world of language. For the poet, Hope becomes both a device and a destination: ‘a boat moored in a glassy cove.’

“In this book, with ‘slow surface,’ its careful and often droll meanderings, Dennis Phillips shows himself to be a poet’s poet, a true, in Heidegger’s words, ‘shepherd of Being.’”

The images of native California plants and The San Gabriel Mountains on double gatefold spreads reference the view from the poet’s porch where the poems were conceived.
These are pictures of the printer's/binder's proof.
Posted by Rebecca Chamlee at 11:57 AM No comments: 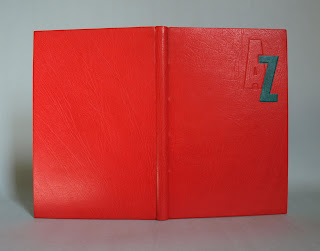 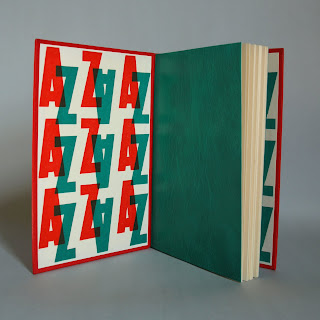 Early this summer I spent 2 perfect weeks at the American Academy of Bookbinding in Telluride, Colorado. I studied french-style fine leather binding with renowned bookbinder, Monique Lallier. One of the books I made was yet another version of Azusa: a sequel by Paul Vangelisti. This time the book is covered in scarlet Harmatan goat with underlay and onlay cover decoration and a green leather fly. I think this is the very best one yet.
Posted by Rebecca Chamlee at 11:50 AM No comments:

Preparations are underway for the Third Biennial CODEX International Book Fair and Symposium on February 6-9, 2010. We estimate over 3000 people will attend the four day event, with 150 presses, artists, and suppliers from all over the world exhibiting and selling at the book fair, and 250 artists, collectors, and curators participating in the BORDERS AND COLLABORATIONS symposium focusing on global collaboration to strengthen and enhance the future of the book arts.
http://www.codexfoundation.org
Pie In The Sky Press will have a table, come and take a look at the books in person!
Posted by Rebecca Chamlee at 7:27 AM 1 comment:

National Museum of Women in the Arts grant proposal 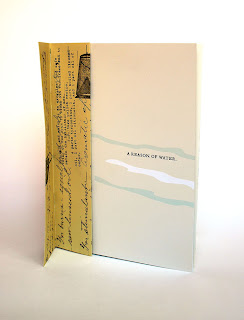 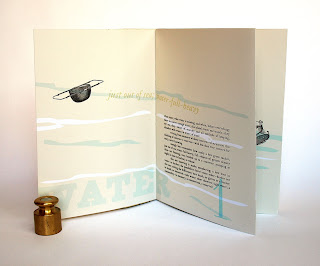 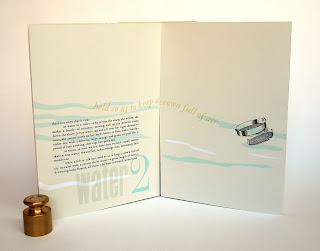 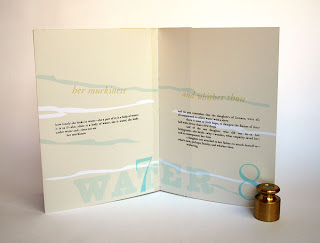 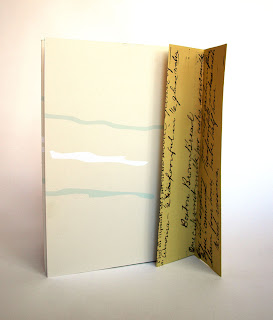 Barbara Maloutas and I are applying for the 2010 Library Fellows Program grant to produce Barbara's poem A Reason of Elements. This is the mockup of the water section.
Posted by Rebecca Chamlee at 4:01 PM No comments: 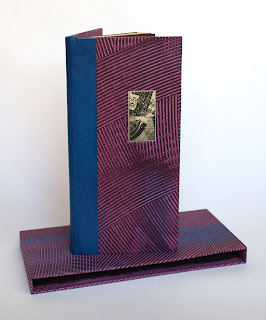 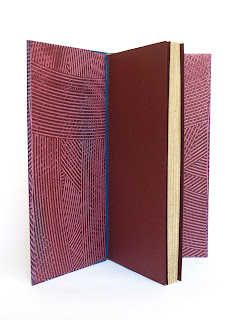 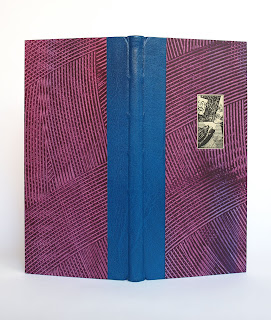 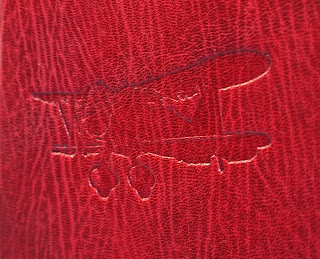 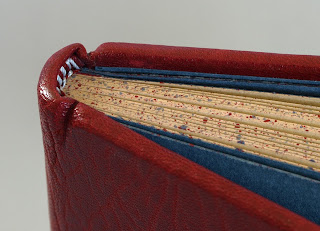 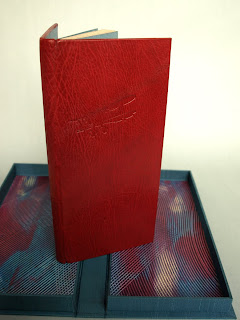 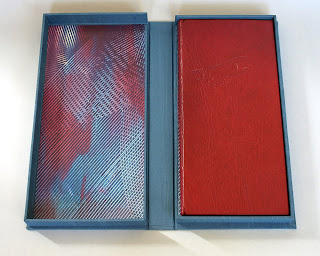 The deluxe copies numbered four and five of the edition of forty are red full Harmatan goat leather. The text blocks were sewn on linen tapes with printed endsheets of Bugra paper, sprinkled edge decoration, hand sewn silk endbands and are stored in a cloth-covered clamshell box. The image of an airplane from the endsheets is impressed into the cover of both the box and the book.

Posted by Rebecca Chamlee at 1:12 PM No comments: 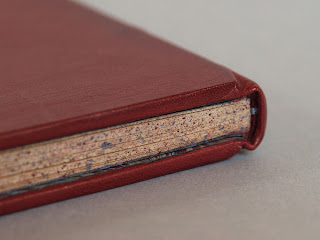 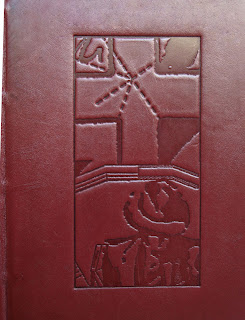 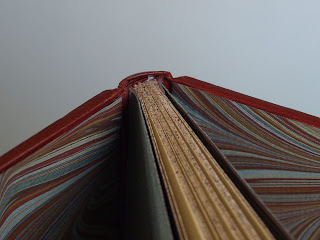 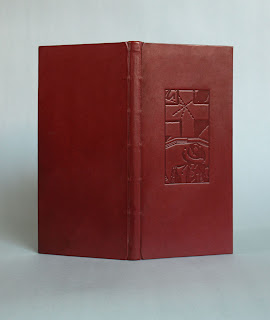 This special copy of Further Apocrypha is bound in red kangaroo hide. The text block was sewn on linen tapes with endsheets of marble paper made by Pam Smith of Marblesmith and hand sewn silk endbands. The impressed image on the cover is a original graphic by the poet, Ray DiPalma.
Posted by Rebecca Chamlee at 2:09 PM 1 comment: 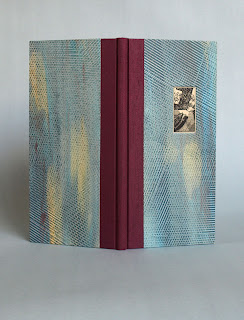 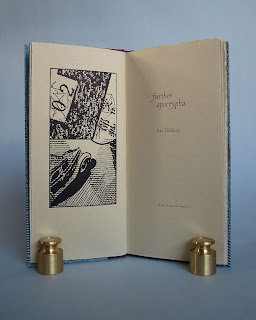 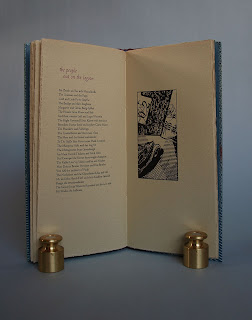 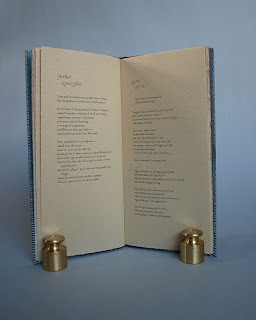 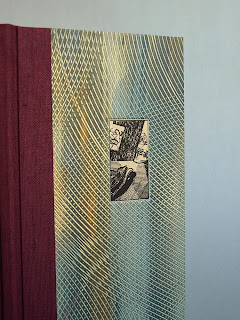 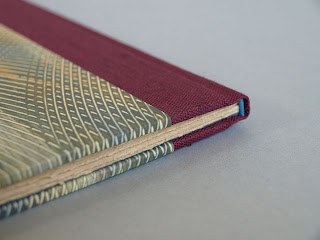 This edition of 35 standard copies was designed, printed and bound entirely by Rebecca Chamlee. The book was printed on a Vandercook from polymer plates of Centaur and Arrighi types and collages by the poet on Zerkell Nideggen paper. The text blocks were sewn on Ramie tapes with printed Bugra endsheets. The quarter cloth case binding has sides covered in paste papers made by the binder and an inset printed label.
Posted by Rebecca Chamlee at 1:59 PM No comments:

I inaugurated Pie In The Sky Press in 1985 to produce finely crafted limited-edition hand-bound letterpress printed books, broadsides and ephemera. The fine press editions of poetry produced from 2009 – 2012 offered the opportunity for a high level of craft in execution, plus collaboration and interpretation that is both exciting and challenging.As a self-taught naturalist, my recent work examines the intersection of my artistic and scientific interests by collecting and cataloging the natural world. I am inspired to record, interpret and celebrate nature.Books are my artistic passion and medium, and explore the intersection of many disciplines such as graphic design, typography, printing, paper craft, image making and the traditional craft of bookbinding. The medium can stimulate cultural dialogue; involve community building and collaborative practice, integrating experimentation with technical, traditional and conceptual considerations.